Calendar Alert Issues with iOS 9.whatever

Switched the first alert to 1 week. Both are now 1 week. Try to change the second alert to 1 day and they both change to 1 day. No matter what alert I want, both alerts have to be the same. What good os that?

This is just an iPad Air issue. I have an iPhone 6S and it now has the same issue since updating.

Please do not respond with the typical, swipe the app closed, turn the device off, etc. I have done all of that numerous times. This is a bug. Am I the only one wth this issue?

Is there a fix you know will work, because turning the device off and closing the app and re-entering the event does not fix this issue. PleaseThanks.

As near as I can tell, it simply won't let you set the alerts out of a reverse sequence. The first alert in the list needs to be the last one to go off (closest to the actual event time). When you create the second alert, it re-arrainges things so this is true. Every change after that can increase or decrease the gap between alerts, but can never reverse their order.

I'm not sure if this is a bug, or just the way Apple decided to make it work from now on, keeping the lists in some kind of time order no matter what. Ideally, if that's what they want they should just keep swapping the alert order whenever you change one to be longer (or shorter) than the other. Changing both alerts is definitely unwanted behavior, a bug.

As is, the workaround is straightforward. Just make sure the last alert you want to hear is the first in the list. As long as you keep the order, it lets you change them any way you want.

The actual order the alerts are listed in should make no difference in how the notifications work.


I admit having the list in the same order as the sequence they go off makes more sense to me when I think about creating a alert list, but when I consider how I actually create alerts I almost always do the opposite. I create the alert that will warn me moments before the meeting, then maybe I'll create one earlier in the day, or week, to remind we to be preparing for the meeting.

I suppose it's possible that Apple has data that shows that this is how most people do it, and so the've made it that way. No idea.

You can let Apple know what you think here (play nice).

But don't expect any feedback. They almost never respond to individuals in this venue. But you may be the one more person that pushes this issue to the top of the things-to-fix-soon list.
Last edited: Oct 2, 2015

Just tried playing with the alert times in Fantastical, as a comparison.

It also plays a weird list order swap, sometimes; trying to keep the list in reverse order like Calendar. Other times it just leaves things alone. The rules seem to be more complicated than the Calendar app, or maybe the bug is just more complicated. It's like they want the same thing as the Calendar app, but instead of forcing the order by changing both alerts, they just give up and let you mess up the order when you confuse things too badly.

It's a better solution than the Calendar app, since it never changes both alerts, just their list order.
OP
C

The biggest issue is that if you decide to change an alert you then can only have one alert because affer that when you change the first alert from, say, 1 week to 2 days both alerts will be 2 days. If you then change the second alert so it is not 2 days like the first one and make it 1 day, both alets will be 1 day. You will not be able to create two alerts.

I did some more Googling and found this is happening with other people and is a bug. It is disappointing that Apple did not check out the Calendar before releasing this iOS. They had an issue with the alerts before the release, but they were workable. Now you cannot use the alerts if you have to change them. I know that I really need to be reminded ahead of time for the events I put on my calendar and prefer a heads up a week ahead and rhen another a day or two ahead and would actually prefer to be able to set a third one 2 hrs.

I though the quick turn around of 9.2 might fix it, but it didn't.

Another words, if I started out with alert one for 1 day and alert two for 2 days I can change alert 1 to anything up to 2 days without causing problems. Alert 2 could be changed to anything down to 1 day, without a problem.

Here's a quick chart I drew to help explain what I mean. As long as you don't try changing things so that Alert 2 is closer to the event time than Alert 1, then there are no problems. When you make a change that would make Alert 2 closer, then Calendar is altering other alert so that the order is preserved. 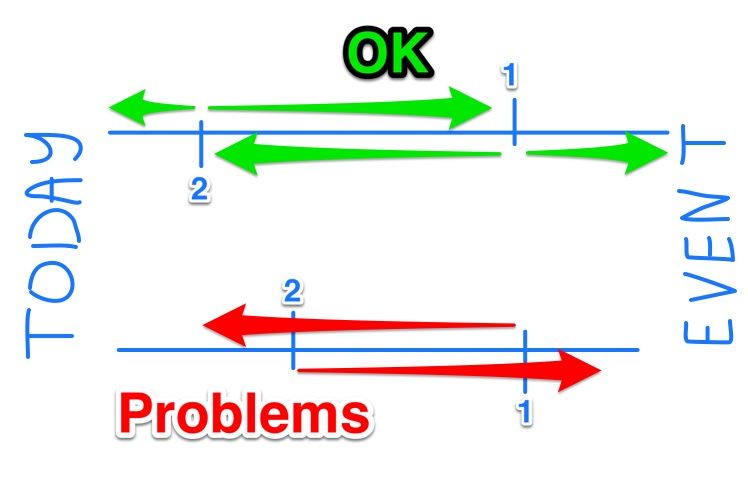 The green arrows indicate the range of changes you can make to the alerts without changing the other alert.

The red arrows indicate that when you try to change the alert past the other alert's settings, then both will change. A problem.

Every example you listed in your first post followed the second result, in which Alert 1 would end up being further in time from the event's time than Alert 1.

I'm not saying this is not a but. It is, as far as I'm concerned. If Apple want's alert 1 to always be close to the event, then the better thing to do would simply to change whatever alerts is closest to the event time. That's what they do when you add a second alert, and what they should keep doing.
OP
C

Thanks. I do believe it is a bug, if not it is definitely poor reasoning by the programmers. Maybe they were looking into a mirror when writing this code because it sure seems backwards.

Yep. Now you've got it. Not that I think you should have to do it this way. There is no reason why the software can't just deal with it, one way or another.

I agree with you about first alert, second alert order not making sense when I think about it; but in practice this is the order I set my alerts up. I almost always set an alert close to the event, think about it a bit, and set a second one to go off sooner so that I know to be prepared. So while it is not in the order I think of alerts, it is in the order that I tend to create them.

Maybe this is common, and Apple has data to show this is how most people do it; so they decided to try and make Calendar reflect common usage.

Still, I expect Apple will change things so Calendar handles things better in future updates. At least I hope they will. I don't care what order the alerts appear in the list, but changing the time of one alert should never change the time of the other.
D

I have had this issue too. Now that I see what Apple has done it is simple ...but they have changed it and not told anyone. I have been using 1st and 2nd alerts for years in Calendar. It used to be that the "Alert" was the furthest from the event and the second alert was the one closest to the event. Now that has been reversed. No big problem, but why not tell people these things ?
It seems every time there is an Apple update for any device they change things fundamentally and you are supposed to just magically know what the update is and how it now works. This is a classic example.

If they had done it right, then there would have been no reason to announce anything. It's only a problem because it doesn't handle a subset of alert time changes the way most would expect. The list order change itself should have been trivial, and unimportant to most people.

Which, of course, means some few people will probably engage in debate death matches over the proper order of alert lists.
H

Switched the first alert to 1 week. Both are now 1 week. Try to change the second alert to 1 day and they both change to 1 day. No matter what alert I want, both alerts have to be the same. What good os that?

This is just an iPad Air issue. I have an iPhone 6S and it now has the same issue since updating.

Please do not respond with the typical, swipe the app closed, turn the device off, etc. I have done all of that numerous times. This is a bug. Am I the only one wth this issue?

Is there a fix you know will work, because turning the device off and closing the app and re-entering the event does not fix this issue. PleaseThanks.
Click to expand...

The answer to this question is easy. We have all been assuming that Second Alert was like a snooze button on the alarm. This assumption is causing the problem The "Second" alert is simply an additional alert. The "Alert" entry will always be closest to the appointment. If you set the Second Alert to be closer to the appointment than the first Alert, the app just switches the times. An easy way to remember this is to consider the Second Alert as an "Additional Alert". Why Apple hasn't figured this out I can't say. I spent an hour on the Chat line without getting this description.. Just test it out. You will see it works!
You must log in or register to reply here.

N
Calendar not giving me alerts on day of?