Best Car mount on the market for any tablet

I have been doing some research on all of the iPad and tablet holders on the market for the past 2 weeks that work in your car, and I'm here to share my thoughts with everyone.

China mounts (suction base or stick on base)
YOU GET WHAT YOU PAY FOR. You can find these mounts for around $20 online everywhere. I tried out the suction cup on my windshield in the car, and it did hold... well, for about 5 minutes. The suction cup mount will not work unless the iPad is suctioned to the windshield, and wedged in the dash. The kit also comes with a plate that you can attach to your dash and then suction the mount to the plate. Again, fail. The only way this concept works is if you screw the suction cup to your dash somewhere, or wedge your ipad on the dashboard and use the suction cup for extra support. The unit vibrates very bad when driving, and is almost unusable. If you attach the mount to the windshield and wedge it in your dash, it is very hard to use and blocks your view. 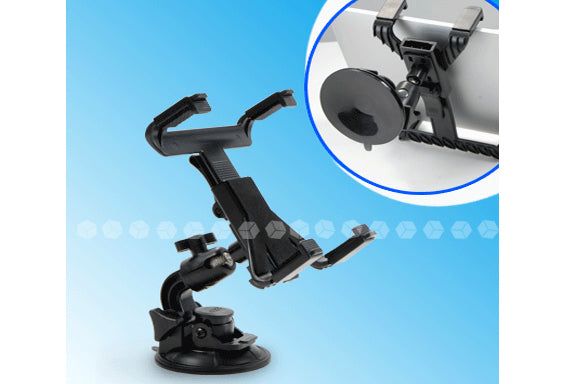 ProClip iPad mount
The ProClip mount was a better over all design than the China mounts, however the actual part that mounts to the dash can't handle the weight of the iPad. We installed their mount to a 2010 Maxima, and like all of their mounts they are wedged between two pieces of plastic on the dash, then they have adhesive tape that forms to the front of the dash. The idea is great if you want to quickly install something to your dash without doing a lot of work, however the weight of the iPad makes the tape come off the mount and eventually fail. We had the iPad on the mount for less than 2 hours before it was separating from the dash. The holder is much nicer than the China mounts, however it isn't easy to slip your iPad in and out of. You have to use two hands to unclip your iPad, and with the poor mount design, it just puts too much stress on the mount. 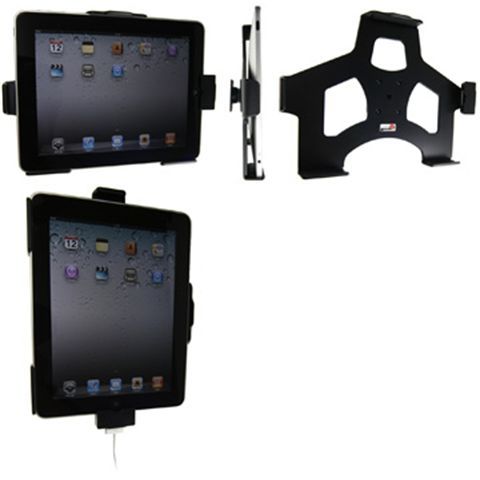 As of this point the Ram mount was by far the nicest looking holder and design from the China and ProClip mounts. We went with the mount that bolts to the seat rail. The install consisted of removing the seat bolt installing their base and re-installing the seat bolt. The Ram mount has a long flexible arm that lets you position the iPad where is needed. Great concept, however the disadvantage is having that long of an arm. When you have a flexible arm that has the amount of weight of an iPad and holder on the other end it tends to wabble very bad, and droop a little when you put the iPad in the holder. The concept is nice because you are able to position the iPad where is needed, but unless you have the iPad against the dash or resting on the console it bounces everywhere. The arm is in the passengers knee as you drive, which is also not a strong point. The actual holder is nice, much nicer than ProClip or the China holders. The holder is much thicker plastic than others. The downfall to their holder is that you have to again have two hands to take and remove the iPad from the holder. The clip is real tight against the ipad also, and I can totally see the iPad getting a mark on over time. 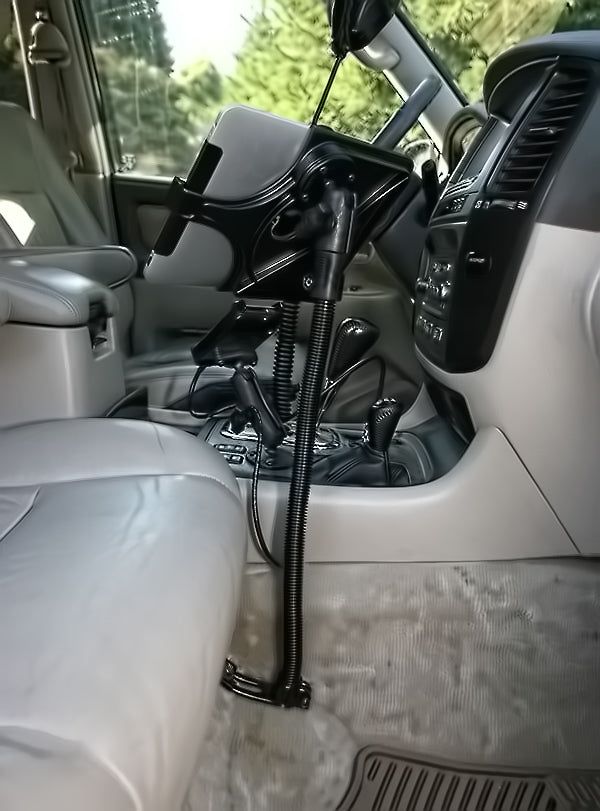 Padholdr mount
Right off the bat I will say our mount is more expensive than everyone else out there. You could buy 7-8 China mounts for the price of ours. Up until this review, I wondered how other companies could be making the holders and selling them for less than ours. That was until I tested them and compared them to the Padholdr. All of our kits including the universal kit are meant to BOLT TO THE DASH. The vehicle specific kits come with detailed instructions on how to remove your dash panel, and bolt the bracket into factory bolts holes. Once the bracket is bolted into the dash you have your selection of step off plate, 6,9, and a 12" arm that allows you to position the iPad where is needed. The bracket and arms are made out of steel and aluminum then powder coated black. The actual Padholdr is made out of a high gloss acrylic material. The Padholdr DOES WORK WITH CASES, due to 3 different sets of spacers that come included with the kit. The spacers are meant to be installed depending on the thickness of case that is used. There is also tensioner adjustments on the side of the Padholdr to adjust the width of the case. We also added felt inside the Padholdr, so you wont have any issues of having your iPad scratched when taken in and out. Attachments are also available for your phone, keyboard, etc. to bolt to the Padholdr. The one downfall to all of the mounts including Padholdr is the vibration when driving. The way that Padholdr fixed the problem was adding a bumper to the back of the holder that rests against the dash. Once the Padholdr is installed properly there is almost no vibration. The actual holder allows you to easily take the iPad in and out of the holder with one hand, which is a very nice feature compared to the others tested. Great unit, and worth the price.

* Works in horizontal only 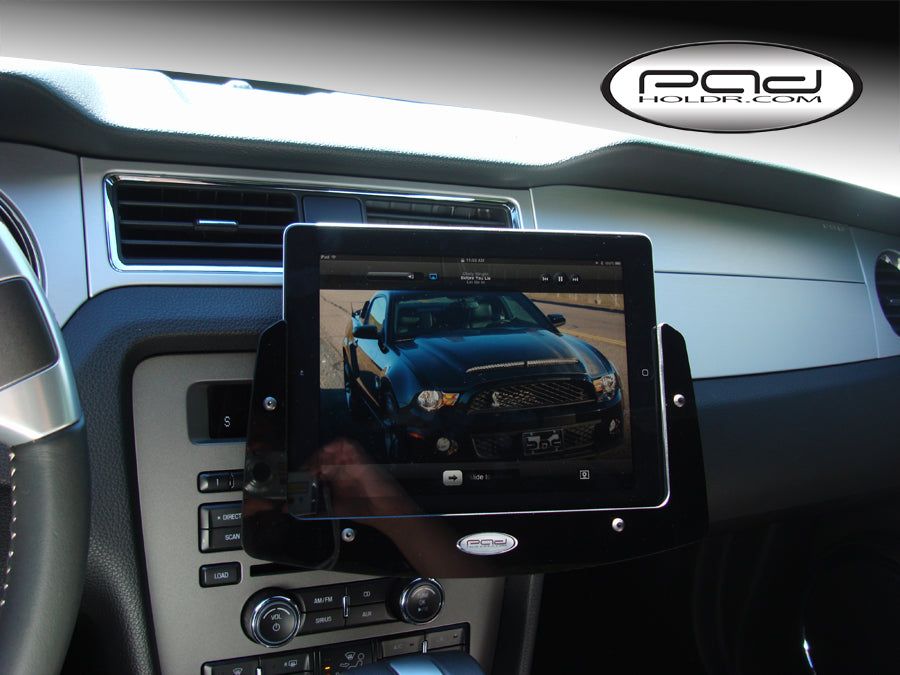 I did my best giving everyone my HONEST opinion of the mounts on the market. If I found that one of the mounts was superior to the Padholdr, I would have been making some changes on our product immediately, but after using them all I can honestly say Padholdr has the best unit on the market, and you get what you pay for.

Interesting article. Very surprised to not see our products on there. I'm guessing the companies listed paid to be on the site. Our
vehicle specific mounts and stands are superior to competitors in the industry. We feel very confident of that.

Padholdr said:
Our vehicle specific mounts and stands are superior to competitors in the industry. We feel very confident of that.
Click to expand...

LOL you have to say that.
Did you bolt that ipad stand to the floor of a new car? That looks like the new Knight rider on the ipad. I wish they kept that going. I loved it. It was a fatality of the writers strike a while back.
The stand looks nice BTW.

"Best" is always such a subjective term.

I did a lot of research before buying a car mount for my iPad, then returned it as it was useless!

Then ordered another which really suits my needs. I got a RAMMount with the 'ToughGuy II' clamp for the iPad and dual windshield suction thingies. (tech vocab?)

By buying the 'ToughGuy II' holder, though more expensive, I can keep my iPad in its case, and plug it into a charger. Some of the other RAMMount holders will not let you keep the iPad in its case. For me that made spending extra for the ToughGuy II worth it.

So it means ordering the individual parts; the dual suction cups, the 6" extension arm, and the ToughGuy II holder. For me, well worth the extra trouble and expense.

It suits me but there are two problems others may not like.

One, it isn't cheap especially with the dual suction cups but those duals do give me a lot of confidence that it won't fall off the windshield if one of the cups comes unstuck.

What might be a second problem for some, but doesn't bother me, is that the kit I purchased can only be used in landscape orientation, not in portrait orientation. As I only use the iPad in the mount for SatNav with Navigon or TomTom this is not a problem for me.

I use all Ram mount parts. Ram is kind of like Lego toys, they make all sorts of mounting parts and then use these parts to build kits. You can buy one of there kits if you feel it suits you needs, or you can look at the list of parts and buy what you want. There mounts are used in Auto, boats, planes and I have even seen some of their parts in use at the Johnson Space Center. Take a look at their web site and see what would work best for you.

I am currently on the hunt for a car mount, and have narrowed it down to Padhldr or Ram. I just bought a 2011 Hyundai Veracruz and in looking at the Padholdr website it appears there is a mount available that fits up to the 2010 model, the installation photo appears to be very similar to the dash in my car and I was wondering if there will be an updated version available for my car as I prefer the overall appearance of the Padholdr. Thanks.
OP
P

b00bie said:
I am currently on the hunt for a car mount, and have narrowed it down to Padhldr or Ram. I just bought a 2011 Hyundai Veracruz and in looking at the Padholdr website it appears there is a mount available that fits up to the 2010 model, the installation photo appears to be very similar to the dash in my car and I was wondering if there will be an updated version available for my car as I prefer the overall appearance of the Padholdr. Thanks.
Click to expand...

Tom,
Thanks for bringing this to my attention. Our kit works for the 2011 Veracruz we just needed to update it on our site.

If you would be willing to post up some pictures of the install after you are done on this forum I can do the kit for a better deal. I will PM you a price now.
D

May I submit a new kid on the block? Check out the new Bridge MTM (mobile tablet mount). Just launched in 2012. Unparalleled device support and afford-ability while featuring
head up precision positioning, with no suction cups, no vent clips, no sticky stuff no heavy hardware and no interior alterations. just google "Bridge MTM"

Hi .. I'm looking for a ipad 3 mount & keyboard tray for 2011 Ford Superduty. Do you ship to Canada? Any deals on a dash mount package?
T

Padholdr said:
Tom,
Thanks for bringing this to my attention. Our kit works for the 2011 Veracruz we just needed to update it on our site.

If you would be willing to post up some pictures of the install after you are done on this forum I can do the kit for a better deal. I will PM you a price now.
Click to expand...

Sorry this was kent to go to pad holder. My first post!
OP
P

Thought I would help out some fellow iPad forum users with a 10% off coupon code. If you use the coupon code socialfriends1 at checkout you will get 10% off your order!
You must log in or register to reply here.