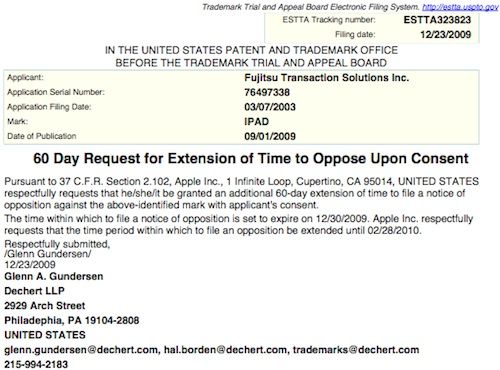 iPad vs iSlate seems to be the HUGE debate right now. Macrumors has just dropped more information suggesting the new Apple Tablet could become the iPad.

Yesterday, we uncovered evidence that Apple has been pursuing trademarks for the name "iPad", with some filings occurring as recently as late last week. The move has obviously led to speculation that Apple may be planning to use that name for its tablet device rumored for introduction next week.

At the time, we noted that Apple had not pursued an "iPad" trademark in the United States, ostensibly due to existing claims on the name by Fujitsu for an electronic retail inventory device. While Fujitsu initially filed its trademark application for "iPad" in March 2003, the trademark has yet to be officially accepted, and was in fact classified by the U.S. Patent and Trademark Office (USPTO) as "abandoned" in April 2009 after Fujitsu failed to respond to a request for additional information. In June 2009, Fujitsu applied to have the application revived and, after amendment, was published for public comment and opposition on September 1, 2009.

Gawker reports today on documents dug up by a new tablet-focused blog that show that Apple's lawyers have filed three requests with the USPTO over the past few months asking for extensions to the allowed time for parties to oppose the trademark application filed by Fujitsu. In their most recent request, which has been granted, Apple's lawyers requested an extension of the opposition period to February 28, 2010.

The reason for Apple's potential opposition is unknown, with speculation of course centering on its desire to publicly introduce its tablet device as the "iPad" before filing documents stating its case to the USPTO. While it is possible that Apple may simply object to Fujitsu's "iPad" trademark on the grounds of possible confusion with its similarity to Apple's "iPod" trademark, those circumstances do not necessarily offer an explanation as to why Apple has requested so many extensions to the opposition period rather than simply filing its opposition.
Click to expand...

M
Apple is Being Sued for Using the iWatch Name