[h=1]Apple's iPad sales: Time for 'pricing stimulus'?[/h] By Larry Dignan | November 15, 2011, 3:44am PST
Summary: Amazonâ€™s Kindle Fire and talk of iPad upgrades just months away may be hampering Appleâ€™s tablet sales. Price cuts could change that equation in a hurry though, say analysts.
The consternation over Appleâ€™s iPad sales in the December quarter is reaching a fever pitch, but at this juncture itâ€™s unclear whether growth is merely pausing or something more serious.
Worries about iPad sales in the December quarter (fiscal first quarter) are actually leading some analysts to call for â€œsome pricing stimulusâ€ on Black Friday and beyond.
To wit:

Here are some thoughts on whatâ€™s going on with Apple iPad sales.http://www.zdnet.com/debate/great-debate-are-200-tablets-a-game-changer/6316989

Later today; Great Debate: Are $200 tablets a game changer?​
The Amazon Kindle Fire effect. The Fire will be landing on doorsteps today and the $199 device could be disruptive. As I noted, the integration is done well and the Fire is a nice entertainment device. If youâ€™re watching specs, however, the Fire is lacking. Itâ€™s quite possible that consumers are watching the word of mouth with the Fire before deciding on a $499 and up iPad. A Fire thatâ€™s good enough can poach sales from Apple. Also see: Amazonâ€™s Kindle Fire: Snappy consumption, impulse purchase device | Kindle Fire vs. iPad heats up for holiday shoppers (survey) 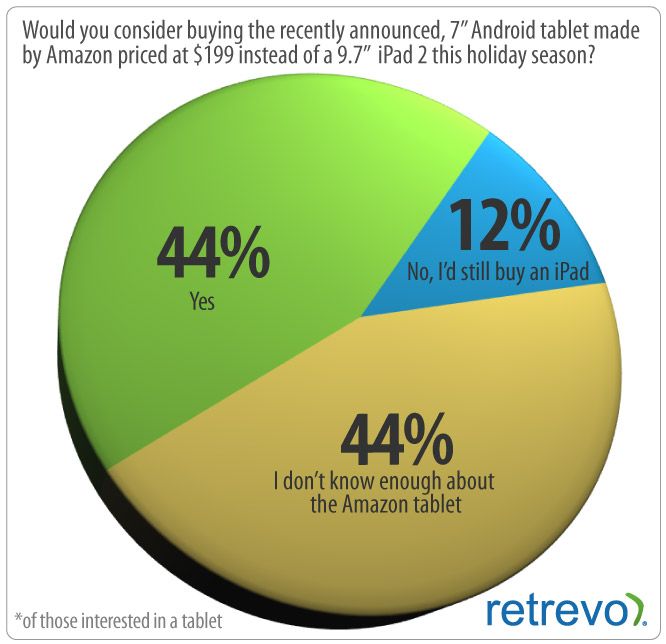 Upgrade rumors for the iPad. Itâ€™s likely that a new iPad will land in March of 2012. Anyone who can wait will. Reitzes had an interesting take on Appleâ€™s upgrade plansâ€”think iPad 2S. He said:

Our research still points toward Apple continuing to innovate in the iPad category with an iPad 3 launching in the March timeframe with an HD screen, Siri integration and a faster processor. It is possible that Apple keeps the iPad 2 in the category as well. First, we expect a possible â€œiPad 2Sâ€ that includes a faster processor and Siri integration. Second, we believe that Apple will keep the current 16GB version of the iPad 2 in the line-up next year, using it as a lower-priced option to compete with new entrants. Indications in the supply chain around C1Q production patterns back these views, even though 4Q momentum has waned.
​
Meanwhile, an iPad 3 could be waiting to support LTE in the fall of 2012. In all cases, consumers know that it may not make sense to buy an iPad 2 right now.
Itâ€™s time for â€œpricing stimulus,â€ said Reitzes. Apple may simply need to cut the price on the entry level iPad. If $200 is the new benchmark for tablets and the Fire takes offâ€”it just mightâ€”then Appleâ€™s iPad will look pricey. Frankly, itâ€™s amazing that Apple has been able to hold iPad pricing this long as rivals repeatedly stumble. Apple will keep the high-end and Amazon will take the low end. Can Apple really afford to cede the low end of the market to others? Iâ€™d argue that Apple will have to dabble in the low end just like it does with the iPhone.
Apple price cutsâ€”if they are comingâ€”would land in just a few days.
Add it up and Appleâ€™s iPad sales growth should be weaker than expected. Consumers are just being rationale and trying to make the best buying decision they can. The big caveat is a lot can happen between now and Dec. 31 on the iPad sales front.

It is very interesting. Has Apple ever cut prices before? Thanks jsh1120

Sent from my iPad using iPF

The Fire is not going to sell more than 5 million in the quarter, and most will go to people who would have bought a kindle, not an iPad.

Profits are what drive the stock price, not sales. Fire profits will be negligible, while iPad profits will set records.

Amazon has to sell more than $600 in content for every Fire sold to equal the profit in an iPad sale,

The Fire is not going to sell more than 5 million in the quarter, and most will go to people who would have bought a kindle, not an iPad.

Profits are what drive the stock price, not sales. Fire profits will be negligible, while iPad profits will set records.

Amazon has to sell more than $600 in content for every Fire sold to equal the profit in an iPad sale,

This article is a space filler at best.
Click to expand...

I have no idea whether Apple will cut prices or not, but the article above is not a comparison of Amazon and Apple profit margins. If, in fact, Apple's inventory is increasing as the article claims and sales of iPad's in the fourth (calendar) quarter i.e. the holiday season are no higher than in the last quarter, that is not a good sign for a retail product at a particular price point. You're certainly correct that profits, not sales, drive stock prices. However, Apple missed the expected sales of the iPad in the last quarter by about 600K units. If the 13 million+ sales expectations are missed in the holiday season by 2 million units, whether the profit margin on iPads is much higher than the Amazon Fire will be irrelevant.

Profits are never irrelevant. Amazons model depends on CONTENT to be profitable. Apple profits on hardware AND content. Apple can miss by 600k units and still bury Amazon where it counts - the bottom line.

Look. Not every article mentioning the Fire is a sales comparison of the two devices. Since Apple reported its last quarter earnings and sales, its stock price has dropped from 422 to 387.' The point is not how many units Apple sells; it's how many units the market expects Apple to sell. Missing the 11.7 million estimate by 5% is a blow from an investor standpoint. As Bloomberg put it, coming in "below expectations is a rare miss for the company." If, in fact, Apple's unsold channel inventory has increased from 1 million to 2.5 million units, that is not a good sign. And if Apple sells 2 million fewer iPads than expected in the holiday season, it doesn't matter a whit whether Amazon sells 5 or 5 million Fires.

You seem to believe this article is an Apple versus Amazon comparison. It's not. The references to the Fire simply note that its introduction may be a factor in creating hesitation to purchase iPads. Along with rumors of an iPad 2S or iPad 3 introduction. No one is claiming that Apple is not profitable, highly profitable in fact. No one is claiming that the Fire will outsell the iPad or generate more profit for Amazon than the iPad generates for Apple. You seem to be defending Apple from an attack neither the article nor anyone else has made.

The point is that investors expect the holiday season to generate huge sales increases for retailers. If Apple sells no more iPads in the holiday season than in the previous quarter investors will not be happy. Apple knows that; I'm not sure why that point escapes you. One strategy to avoid that outcome is to cut prices. Apple knows that. So does every retailer. Apple may or may not adopt a pricing strategy to deal with that possibility. If they do the strategy will be interpreted as a reaction to the Amazon Fire. Not because the Fire is more profitable on a per unit basis than the iPad but because competition in a market tends to spur (a) innovation and (b) more efficient pricing.

thewitt said:
Profits are never irrelevant. Amazons model depends on CONTENT to be profitable. Apple profits on hardware AND content. Apple can miss by 600k units and still bury Amazon where it counts - the bottom line.

The article is meaningless filler with even more meaningless analysis.
Click to expand...

Some of the us think that the above analysis is interesting...so please respect that.
I

I'm sure a lot of people use IPF as a sort of clearinghouse for iPad/Apple related information. The more the better. I say let each decide for his or her own whether it's worthwhile or not.

skimonkey said:
Some of the us think that the above analysis is interesting...so please respect that.
Click to expand...


You are welcome to your opinion. Mine is simply that the analysis is meaningless page filler.

Just as an aside, the only thing that interested us about developing for the Fire was the embedded CRC checking at runtime that prevented a rooted device from running uncontrolled code. They removed that from the production version so we will likely NOT be porting our syndicated content streaming apps as originally intended.

It's no more secure than any other Android device.

Such emotion an loyalty to our beloved Apple / iPad!! Makes for interesting reading on a quiet day at the office lol.

Interesting piece of information...liked it..
You must log in or register to reply here.