Appleâ€™s next iPad will be available on March 16th, additional launch event planned !

Information by an Apple Store source who has been reliable in the past has indicated that preparations are being made for a big Apple Store event which will culminate on Friday, March 16th. Naturally, this points to an iPad 3 launch on the Friday just nine days after tomorrow’s announcement. Apple Store in London at the world famous Harrod’s will open on that date as well as a new Store in Houston, Texas.
E

So this is just a rumor from a random Apple Store employee?
OP
A

As of now everything is Rumour even the event happening tomorrow is not confirmed by Apple yes officially. However this is in addition to tomorrow's event. Tomorrow maybe the Official Launch and March-16th will it start selling so...

Hoping to be able to order from Apple's site tomorrow!
T

i could see the ipad 3 launching next friday it seems apple likes to launch on fridays.
like Gayle said lets hope that we can order from apple tomorrow because i could get 12 months
zero percent intrents if i get an apple card. so i can get more in debt lol
Last edited: Mar 6, 2012

Would be nice if we could pre-order.
S

augustya said:
As of now everything is Rumour even the event happening tomorrow is not confirmed by Apple yes officially.
Click to expand...

That's funny. Here is the announcement... 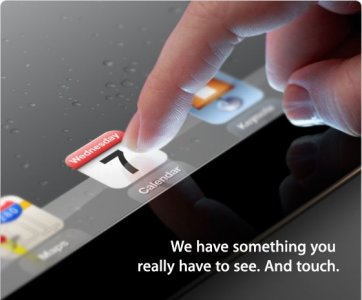 Yeah, the design is ingenious.
OP
A

But does it talk about anything in specific about iPad3 no right ? It is what experts and people are making out of it, what it could be ! Did Apple say it is about iPad 3 ? No right ?

It is almost a certainty that the iPad 3 will be released tomorrow. Less certain that they will be releasing the new AppleTV at the same time. There is a rumored Apple event next week. It is also pretty certain that the iPad will be in stores on the 16th. They would not put them in stores on the 9th due to the inability to get on-line orders in. It is almost certain that the on line ordering is going to be chaotic, and that after the first few days, people will be put on backorder. Since they will probably still be making iPad 2s for a long time, and the apparent inability to kick out the retina screens at the pace of the original screens, it amy be a long time befor the catch up to demand.

I am presuming the announcement will be 10am USA time.
S

Actually 5 when you consider Hawaii.
OP
A

saphire said:
I am presuming the announcement will be 10am USA time.
Click to expand...

Thank you, if it is today then I need to get my pre-order in as quick as possible.
Last edited: Mar 7, 2012

SheerLuckHolmes said:
USA has four time zones! Which 10:00am????

Pacific
You must log in or register to reply here.

M
Apple Said to be Planning iPad 3 Launch Event in March, and â€œStrangeâ€ Event in Feb