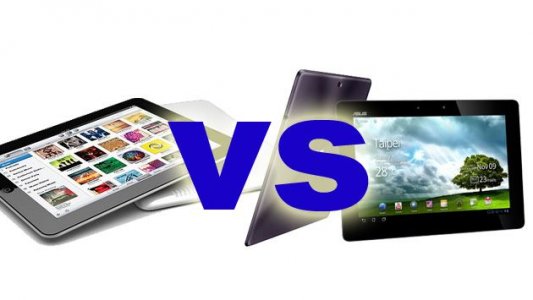 Apple iPad 3 vs Asus Eee Pad Transformer Prime
Apple's iPad 3 is enjoying a healthy amount of attention in the run-up to its official unveiling, which is rumoured to take place in March of this year.
Camera
The Asus Eee Pad Transformer Prime features an 8-megapixel primary camera with autofocus, LED flash, geo-tagging and 1080P video capture and a secondary 1.2-megapixel camera for video-chat and vanity shots.
Both cameras on the Asus perform well with the primary offering easily outperforming any other tablet camera we've used to date.
The iPad 3 will likely feature an improved camera, with some parties predicting an 8-megapixel snapper like that seen on the excellent iPhone 4S, which will likely benefit from autofocus, LED flash and geo-tagging.
We also expect the iPad 3 to offer 1080P video capture too.
The secondary camera is a shoo-in for an upgrade too, and we expect to see the VGA offering of the iPad 2 removed and replaced with a 1.3-megapixel snapper capable of offering FaceTime in glorious 720P HD.
If the predictions are accurate users will be very pleased by the upgrades, as the iPhone 4S is one of the finest smartphones for photography on the market.
Winner - Draw
Display
The iPad 2's display is excellent, and we expect Apple to push the iPad 3 even further. According to sources we are looking at a display with the same dimensions but double the resolution of the iPad 2 at 2048 x 1536.
The device is also rumoured to have a pixel density well in advance of both its predecessor and Asus' Eee Pad Transformer Prime, with a rumoured 264PPI.
Asus' Eee Pad Transformer Prime isn't lacking on the screen front though. Its 10.1-inch Super IPS+ LCD display is far and away the best screen we've seen in an Android tablet and with a resolution of 1280 x 800 and a pixel density of 149PPI it's easy to see why.
Corning's Gorilla Glass offers a neat layer of protection on the Transformer Prime's screen and we expect to see a toughened coating over the face of the new iPad too, though whether it will be Corning's next-gen Gorilla Glass 2 is anyone's guess.
Winner - Apple iPad 3

Software
Tradition dictates that Apple will release a new iteration of its hugely popular iOS platform with the iPad 3.
Details of what to expect are thin on the ground at this stage but we're looking forward to seeing some significant bug-fixes, enhancements to offer better batter life, and improved multi-tasking, along with 3G & 4G support for FaceTime and improved security functionality to rival Google's Face Unlock.
Beneath the improvements, iOS will still be the same usable piece of software that everyone has grown to love with hundreds of thousands of apps and a super-intuitive UI.
The Transformer Prime has just been updated to Android 4.0, and the benefits of thisupgrade are multiple â€“ we'll be detailing them in a separate review.
Features such as an improved notifications system, new UI and overhauled core applications, like Gmail and Google Maps, add to the devices charm and the 400,000+ apps available in the Android Market do nothing to harm the device's reputation either.
Still though, Google's tabet platform is still grossly underprepared for real battle in the tablet markets. But at least Android 4.0 is a step in the right direction.
Winner - iPad 3

Considering the article is a comparison of a released tablet with a rumored set of specifications, it's hardly surprising that the iPad 3 wins. I fully expect Apple to release a fine piece of equipment; they usually do. But this article is simply silly. Along the lines of comparing the person I married to the fantasy of having Angelina Jolie in my bed.

jsh1120 said:
Considering the article is a comparison of a released tablet with a rumored set of specifications, it's hardly surprising that the iPad 3 wins. I fully expect Apple to release a fine piece of equipment; they usually do. But this article is simply silly. Along the lines of comparing the person I married to the fantasy of having Angelina Jolie in my bed.
Click to expand...

Right - its a theoretical, hypothetical, maybe comparison. Its like....OK then.....
Z

Yeah-I agree. No point in comparing the as to be released iPad 3 against an existing tablet. The iPad ultimately wins in most of the tablet wars anyway.
The one nice thing about the Transformer is the the lock in keyboard option that does transform it into a netbook. However, I like the Slider option better, to have a keyboard already built in.
Either way, I hold on to my iPad 1. I go back and forth between that and a Samsung Galaxy 7 plus. The 7 I tote everywhere due to its size and I use it to read a lot, but the iPad comes with me to seminar meetings. I use both equally, and the virtual keyboard on the iPad is pretty nice anyway. I haven't bought any Android apps yet-might buy a couple, but I have a huge iOS collection, and and will always have an iPhone. But iPad does always end up being the tablet to beat.
D

I agree. A good friend has a Transformer and one of the biggest issues are lack of apps I consider essential. In the end, I think the Transformer is probably the best of the Android tablets I've tried but I'm going to upgrade to Ipad 3 having lots of productive apps and being able to sync things easily across my Touch, Ipads and Iphone (which I don't now have but will when my current phone contract with free mobile hotspot is up in May).
Z

Yeah, Android doesn't have all the productivity apps, but the app Market is close to the number of apps in the App Store, or at least a lot closer than it was before, and I'm starting to find some of the productivity apps I was looking for-just have to search more, and I'm not on Android forums as much. I also realize that not all apps perhaps run on a tablet screen, but thus far what I have runs fine on my 7 inch Galaxy Tab. I have a free version of one of my favorite games and it runs full screen with no issue. For me, my two tablets have different functions yet the same at times. If I want to type out an e-mail without going to my desktop, the iPad rules because of size. But yeah-I have an iPhone, so I like the sync across the board deal too. I got the Galaxy as a present, so LOL, I wasn't going to exactly say no, and I decided it's fun to have it as another function, and sometimes the same, as when I feel like it, I use my iPad to read in bed too. If I'm more tired, I now go right to the Tab. I do like having a smaller tablet, and if Apple ever came out with a 7 inch iPad, I guess it would be somewhat redundant, so it's rather fun having both, but I'm not sitting here crowing about Android either, just that I find it cool in its own right but I like my Apple products as much as always, and iPad does have the certain slickness to it always!!
You must log in or register to reply here.