Apolo a personalised mobile newspaper for the iPad


This is really a neat story. Look at You Tube Video link too...

A personalised mobile newspaper for iPad users has been launched by a team of former Google and Bing engineers.

Apollo News, the first product from Hawthorne Labs, aggregates content based on a user preferences algorithm, in a similar way to how Pandora recommends music for its users.

The app was created by Evan Reas, Shubham Mittal and Prasanna Sankaranarayanan, who together have an employer history which includes Google, Microsoft and Bing.


Co-founder Reas told Journalism.co.uk that their idea came from their own frustrations with accessing interesting content online.

"We started thinking about problems, the future, and what we thought would be cool to create," he said.

"We all are heavy consumers of online content (as many people from our generation are) and love discovering new sources of content, but find that difficult when there is so much stuff out there, especially the long tail of blogs and other sources that have yet to hit the mainstream. We want to help people discover this great content while helping to get the best unknown sources of content, discovered."

"That is about the same cost as a few real newspapers that will only give you news for one day," Reas added.

The team now plans to make the app available on the iPhone as well as on the web itself, but says future developments will reach much further than the Apollo app.

"Our hopes are more for the future of the company than just this one app," Reas said. "We want to create a company with the main daily destinations (mobile and non-mobile) of news for consumers".


These guys had balls! They didn't know Objective C and didn't even own an iPad nor could they buy one. Look at what they have created!
Last edited: Jul 19, 2010

First time I have ever seen anyone allowed to plug something into an Apple store device. The blue shirt guy will be getting force feed more Apple kool-Aid.

So what do you think of the app?
OP
4

Apollo does not rely on Google which is a good thing! 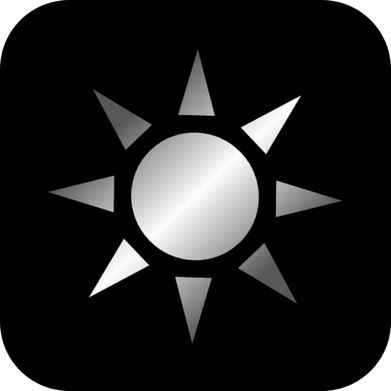 ​
Another app has joined the ever-growing iPad RSS newsfeed marketplace. Apollo News was released recently by Hawthorne Labs Inc. The app pulls articles into one of seven pre-selected categories. These are: Top News, Business, Sports, Entertainment, Life Style, Funny and News Videos. These news sources are automatically configured within the app.​
Six articles from one of the seven categories are placed nicely on the top two-thirds of the app’s main screen. The categories are shown on the bottom third of the screen, along with the title of the first category article and picture. This layout works in both landscape and portrait mode. 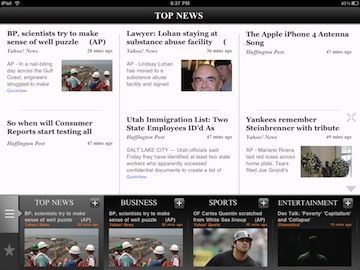 ​
A click on an article’s “Quick View” previews it in a box; a click on the article itself sends the reader directly to the article’s website. The user however, never leaves the app; everything remains in the app itself, including the linked website.
As with YouTube’s popular thumbs up and thumbs down feature, readers of Apollo News can rate each article. As articles are rated, the app pulls new content based on those preferences. For example, if you aren’t interested in soccer and rate stories about the game poorly, eventually those stories will be eliminated from the app. The app allows unlimited blog feeds and calls itself the “Newspaper of the Future.”
Apollo News allows users to add feeds from additional sources, as do other newsfeed apps. I didn’t find this feature easy to use, nor was it heavily advertised (probably by design). The app’s creators claim thousands of feeds are already included, so adding from other content sources isn’t necessary, but is possible.
So many iPad (and iPhone) RSS newsfeed apps rely heavily on Google’s own Reader feature. Apollo News does not, which is refreshing. I have found a great deal of new content using this app and, very quickly, it has become the first app I look at each morning.

Like the premise of the app, but with 4 browsers and several readers I'll wait before jumping yet again......
R

The app looks interesting, but I'm not sure how it differs from Early Edition. they look pretty similar.
You must log in or register to reply here.

4
HOT IPAD TIP: Turn Any RSS Feed Into A PDF Newspaper for iBooks

'The Daily' iPad newspaper set for launch on January 19th, according to sources

M
iPad Newspaper Subscription Plan on the Way From Apple