A Game With a Unique History: Babylonian Twins Launches on iPad and iPhone 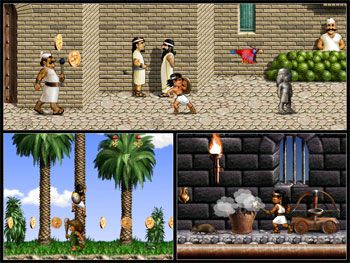 Weâ€™re well used to games telling stories of course, but itâ€™s not often that you find a video game with an interesting story surrounding its very existence. Babylonian Twins HD is a new game based on the original Amiga version that was made in Iraq by two students during the economic sanctions back in the early nineties. However, the unique history-themed game about Mesopotamia was never released due to the sanctions and the demise of Commodore.

Then, in 2007, videos of Babylonian Twins were published for the first time on You Tube, sparking a massive reaction from the Amiga retro community. That success prompted the original team to reunite from Canada, Australia and the US to finally bring the unique puzzle platformer to the masses.
The game, which is available in both an iPad HD version and an iPhone/iPod touch version, tells the story of two princes of Babylon, Nasir and Blasir, and their quest to defeat the evil magic of the great sorcerer of Babylon and bring peace to the city. The gameplay features unique two-character tag-team type play, authentic Mesopotamian art, and traditional music by an Iraqi artist. It has over a dozen large puzzling levels with five different worlds to explore: The Tower of Babylon, The Assyrian Palace, The Hanging Gardens of Babylon, The Procession Street and The Old Dungeon.

The game is already getting great reviews, and is now available for download at a discount launch price of $4.99 from the Apple iTunes iPad App Store. Grab a slice of video games history for your iPad!

[ame]http://www.youtube.com/watch?v=DZTHOy87Fkw[/ame]
You must log in or register to reply here.

4
Babylonian Twins â€“ The Quest for Peace in Ancient Iraq